Yesterday DJ and I went out exploring. 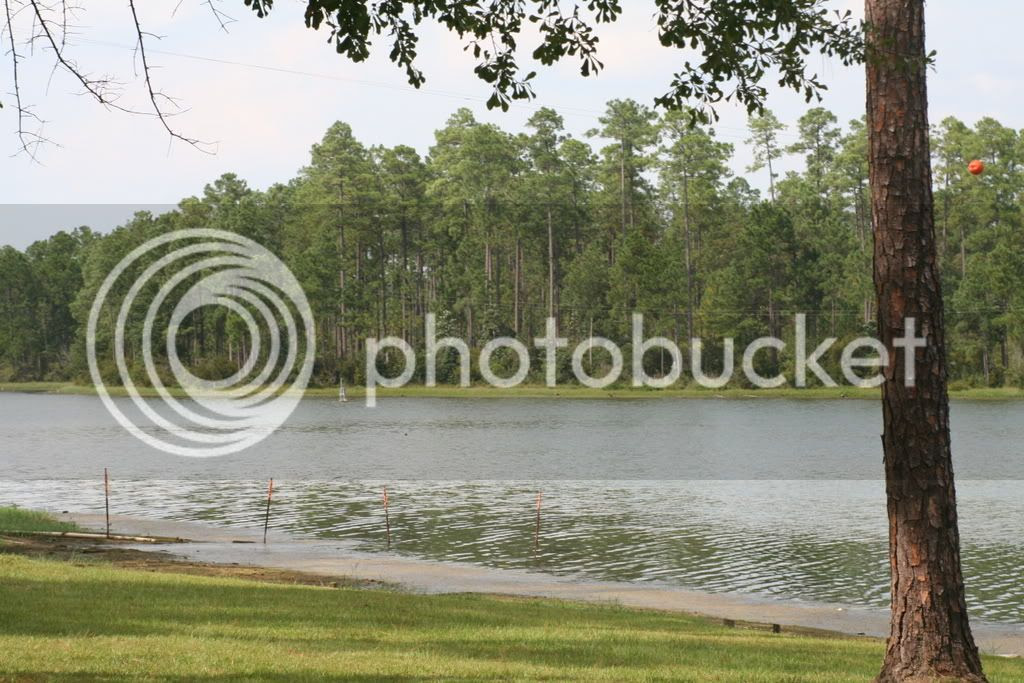 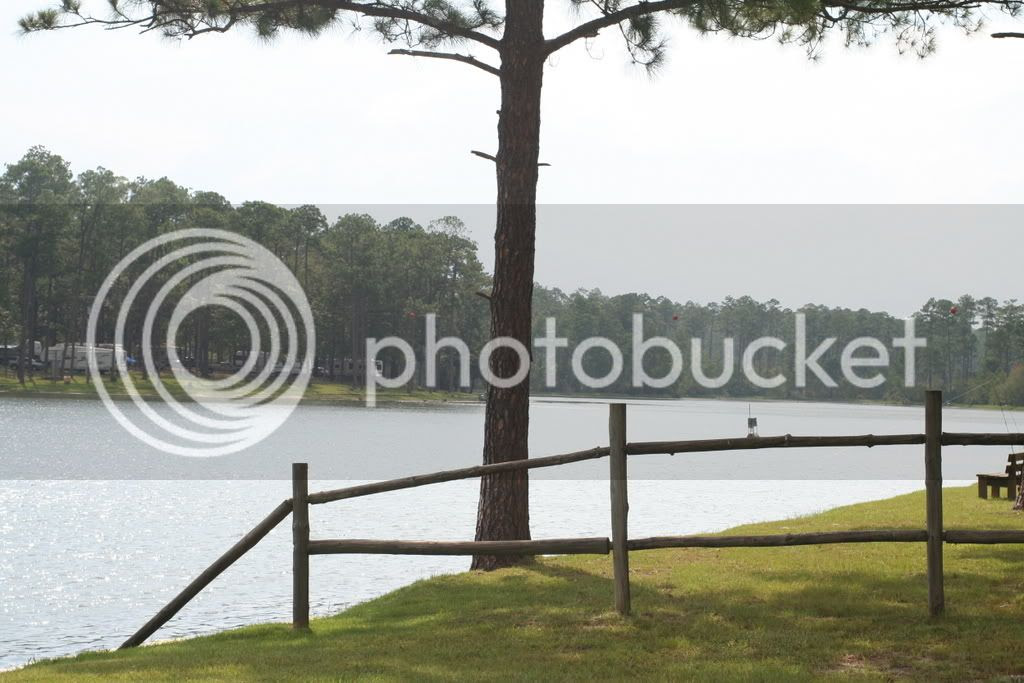 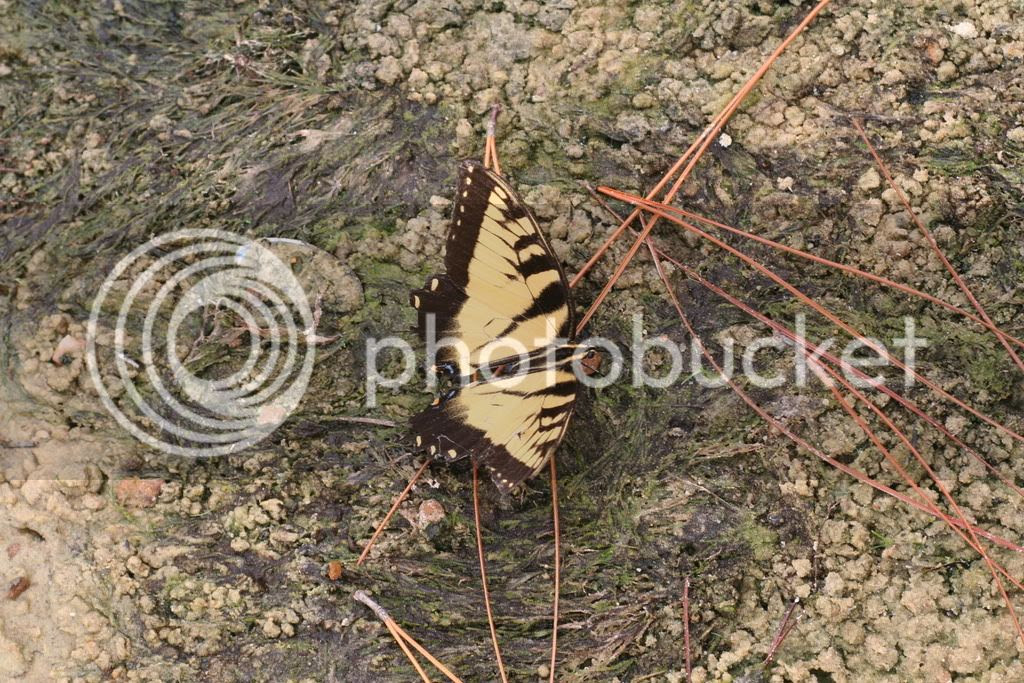 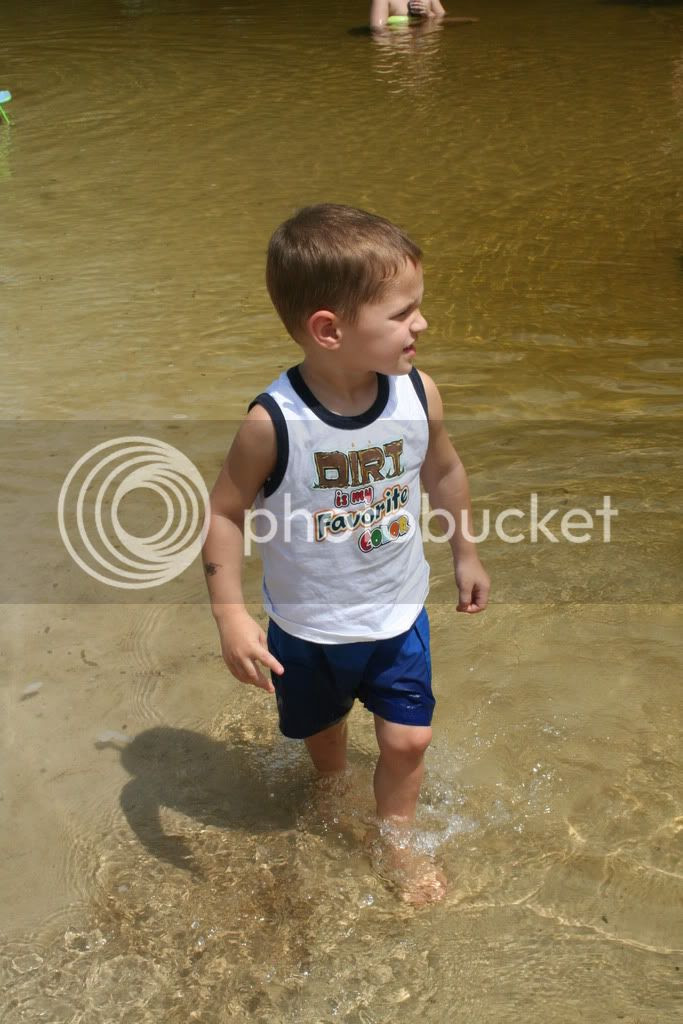 We picked up Kelsey at one point and she tagged along: 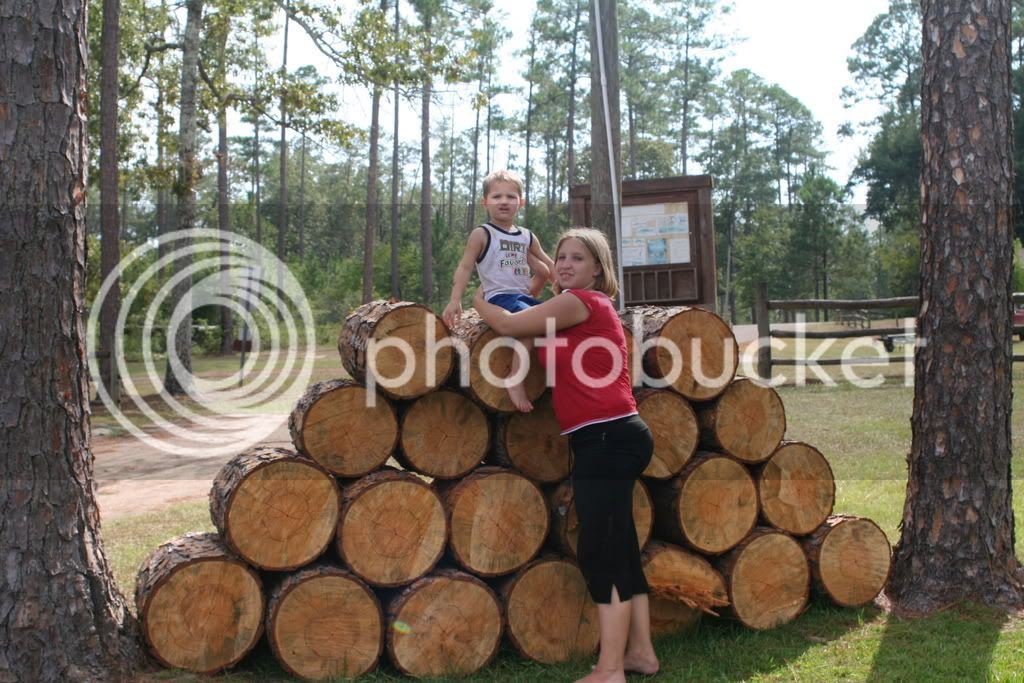 My "little" ha ha brother and his band have a gig coming up in LA. If you are in the area check them out! And cheer really loud for me!

Ah yes, the little girl is grown up.

Kelsey has volunteered to video tape the football practices and games for the varsity football team at the high school.

Now how old does that make me feel?

I feel like I should still be a freshmen in high school, not have one!
Posted by Unknown at 3:52 PM No comments:

Ok you have to check out this blog. This lady is a hoot and a half! She is the author/seller of this Lot of Pokemon cards and is just an absolute riot to read.
To say I feel her pain is an understatement. ;) To the point where today when I entered Walmart (aka Evil Empire) to pick up a few things by myself (because all three kids are at school), I felt like doing the happy dance.
No statements of:
"Mom, can we get ice cream?"
"Mom I need supplies x,y,z for Mrs. C's class" to add to supplies a, b, c, d, e, f, g, h, i, j, k, l, m, n, o, p, q, r, s, t, u, and v that I bought earlier this week from the first supply list that was sent home.
"Mom we need milk, cereal, and dog food (which I got everything except the cereal).
Or my personal favorite of late: "TOYS MOMMA! I need new Toys, because I am a big boy who is good at school!" ah the joys of bribery. ;)
Posted by Unknown at 1:13 PM No comments: 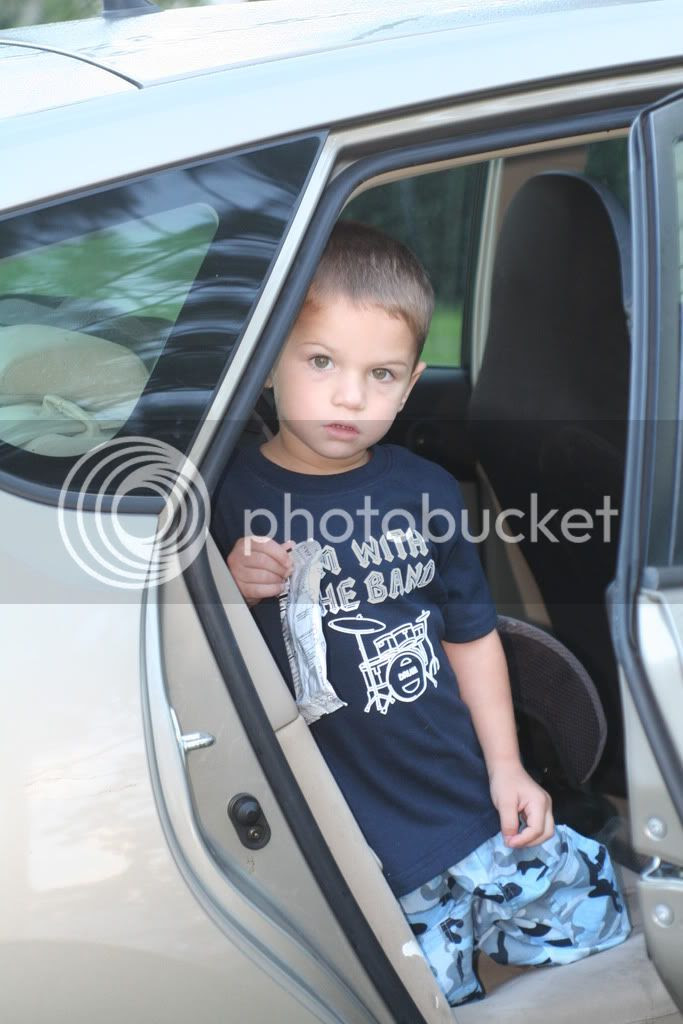 DJ refused to smile, but he was sooooo excitted to go to preschool. 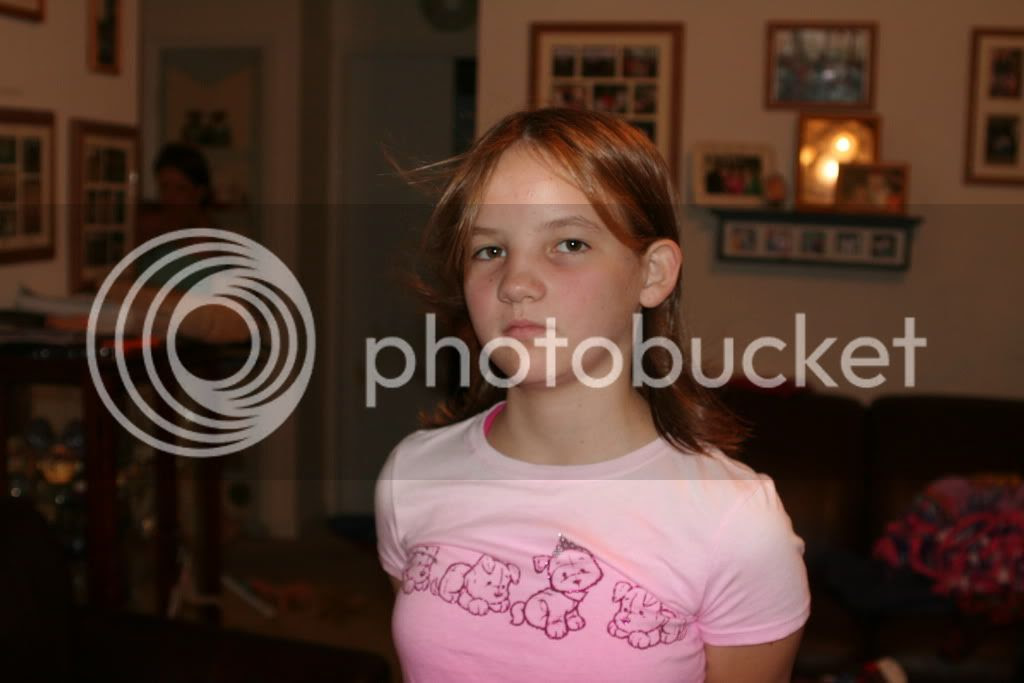 Just being herself.
Posted by Unknown at 11:15 AM 2 comments:

Anyone want to buy a house in Crestview?
Since I don't have a full time job for this school year (or even a substitute job at this point, but that is a whole different post), we can start trying to sell our house now.
We bought the house right at the height of the housing boom, so we have to sell it for no less than $230,000, because that is what we owe on the house (which I know sounds really high especially compared to up north,) but that is about what houses here are going for. The house can be available as soon as Christmas, or as late as July of next year, as Jerry has to be in Georgia by the 18th of December, but the kids and I had originally planned on staying until the end of the school year, but if we sell the house we don't have a problem moving when Jerry goes.

The house, is a four bedroom, two bath, two story house, approximently 1700 square feet on a corner lot with a two car garage. I dont remember the exact lot size, but it is bigger than most in the area (and I can find it easily enough). The set up of the house is: Front door opens to the stairs and living room, then as you go back through the house, the master bedroom and bathroom(the bathroom has two doors, one to the bedroom, the other to the hall) are on the right and the kitchen/dinning room are off to the left. Hall really isnt really the right word, the living room flows back to the bedroom and kitchen doors, so its not a hall per say. Upstairs are the 3 remaining bedrooms and bathroom, as well as a large loft area that over looks the living room. We use the loft area as an office area for my husband when he is home. We were told when we bought the house that the attic area over the loft could be converted into an office or another bedroom with some work, but we have not looked into it.
The backyard is fenced in with a privacy fence, we have an easy set pool back there and there is pleanty of room left. There is a large oak tree with a branch perfect for a tire swing, a sectioned off area for a garden (that did really well for us this year). We looked into putting a pool in until we found out that Jerry was crosstraining, so there is pleanty of room for one if someone wants one.
We live in Crestview, which is 50 miles east of Pensacola, 140 miles west of Tallahassee, 30 miles north of Ft. Walton Beach and Destin, and 25 miles south of the Alabama state line. We are exit 56 on I-10. It is a fairly quiet community that has a lot of things to do within an hour drive or so. Mobile is a 2 hour drive, Pensacola is an hour, Eglin is 20-30 minutes depending on traffic, and they have one of the best hospitals, plus the va is building a new building on base for retiree services. Hurburt is 30-40 minutes depending on traffic. Talahassee is 2 hours. Atlanta is 6 hours (and a main hub for the airlines so it is cheaper to fly in there and just drive up to get people from the any far distances).
Crestview is a nice town. Small hick town to a degree, but yet there is pleanty to do and I have yet to meet anyone that was just mean to be mean. There is a fairly even mix between military and non military people here in town, so everyone is used to people that have moved around a lot, and lived in different places. They do activities down main street every year for different things, like a fall festival around halloween, a veterans day parade, a christmas parade. Then they do a small (and I mean small) fireworks show on fourth of july that is nice because you dont have to drive far and you can see all of the neighbors.
Okaloosa County Schools are the best in the state pretty much every year. The kids in the neighborhood attend Southside k-5, Richbourg 6-8, and Crestview High School They offer several Choice programs with everything from avionics to automechanics and technology. Plus the regular school classes have some of the best teachers in the district.
There is also pleanty to do in the local area, there is lots and lots of lakes and ponds and rivers for fresh water fishing, and of course the gulf for salt water fishing, or hanging out at the beach (which we dont do too often, because it gets old after a while). Down on the island there is a gulfarium (aquarium), waterpark, state parks etc. The local area has a couple of big festivals, Old Spanish Trail is in May, Billy Bowlegs is in june, and the Mullet Festival is in October, plus several seafood festivals, and other things that go on in the area.
There is a YMCA that has a full scale gym up on main street, that also offers a lot of extra stuff to do as well.
I dont get down to Ft. Walton too often because really Crestview has everything a person needs except the mall, and the mall down there is barely worth driving too, if you are really in the mood to shop its better to drive to Pensacola or to the outlet mall in Destin (which is HUGE). There is talk of building a mall in Crestview in the next 3-5 years, the land has been bought and the anchor stores have been approached according to the paper.
Crestview is a lot less likely to get really hurt if a hurricane comes on in Ft. Walton, just because of the distance to the shore (30 miles or so). After Ivan the biggest damage was from people loosing their roofs up here from the wind, and that was houses that hadnt had new roofs in 10 years or so. Down where in Ft. Walton Beach, Destin, Navarre they get flood damage as well as big time wind damage from storms. Our neighbor said they only were without power for 2 days or so after Ivan, where as down on the coast they were out of power for a week.
The only downside to living here is that house insurance is outrageous, but that may go down the longer we go without a major storm, but that is a given no matter where in the state you choose to live.
If you click on any of the underlined words it is links to webpages that might help you get an idea of what there is around here.
If you are interested in the house let me know and we can talk.
Posted by Unknown at 11:23 AM 1 comment:

This weekend was one of Jerry's "short" weekends at school. Every other weekend he gets a three day weekend, as the base shuts down on Friday. This weekend was not one of those weekends, so instead of him driving home we drove over there to spend the day with him.

It was a good day, just really long on the road. The kids and I left here around 940 this morning and got home around 10 tonight.

We went out to lunch at the Beau Rivage at their buffet. Then we decided to drive to the Gulf Coast Gator Ranch, in Moss Point MS. When we started out for the drive over we were thinking that it was in Ocean Springs, so fairly close to the base. Unfortunately it is not as close as we were thinking. We had a great time however, and we went on the air boat ride. We paid for a 30 minute trip, but we were out for at least 45 minutes. Our guide was very nice, and the ride was very enjoyable.

After our trip to the Gator Ranch we went out to dinner, then took Jerry back to the base and then the kids and I came home.

Now for my gas prices rant. Why is it that in Mississippi and Alabama that gas prices are any where between 10 and 20 cents cheaper a gallon than here in Crestview? Tell me how that makes sense. 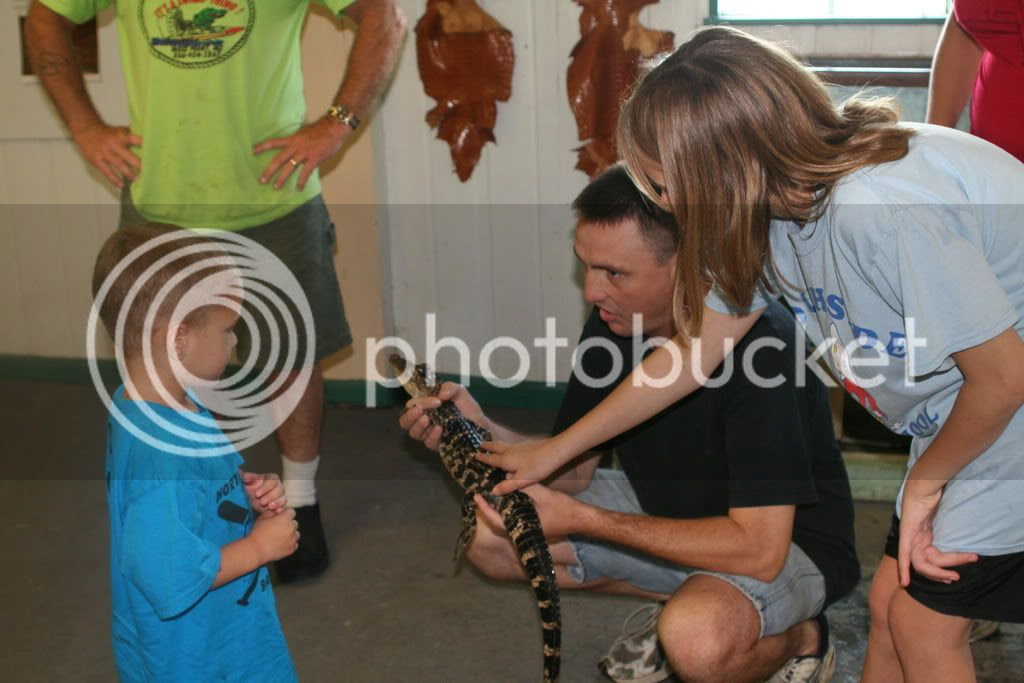 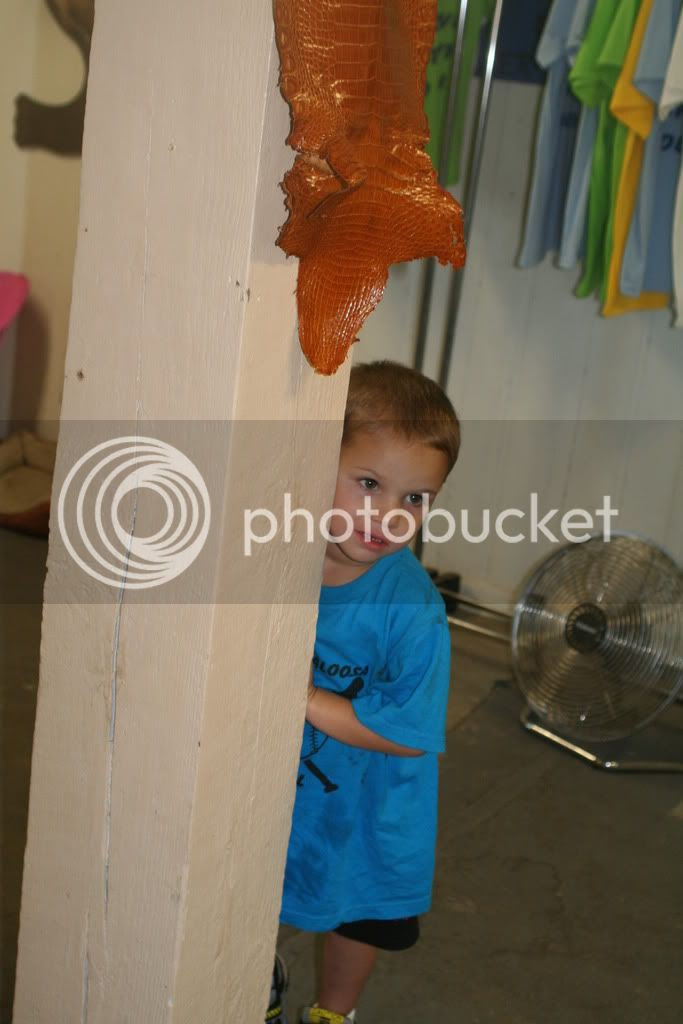 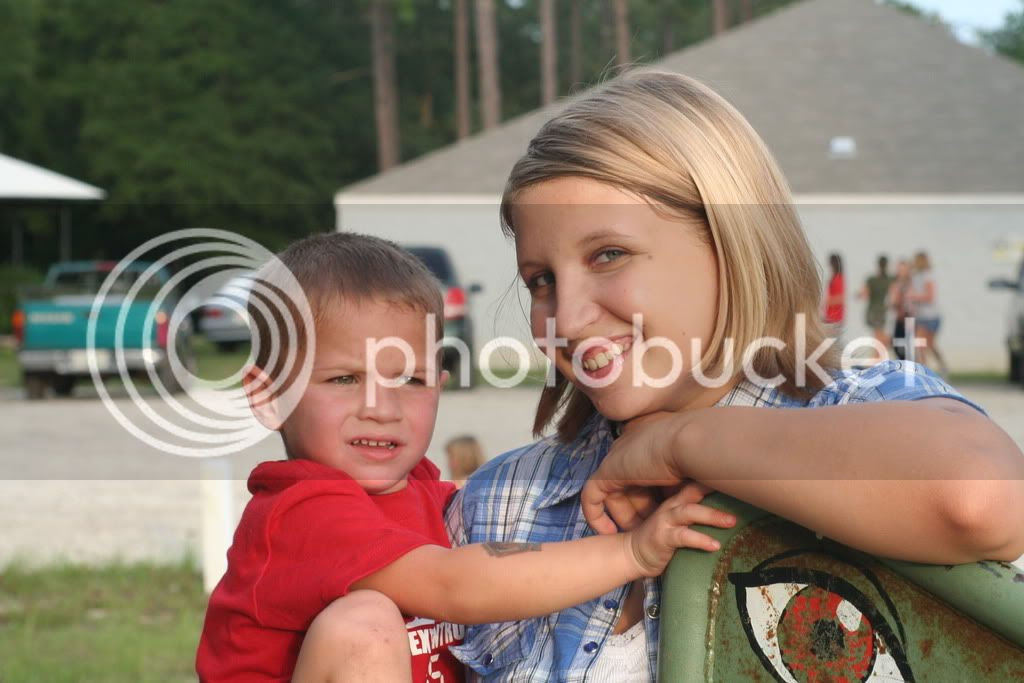 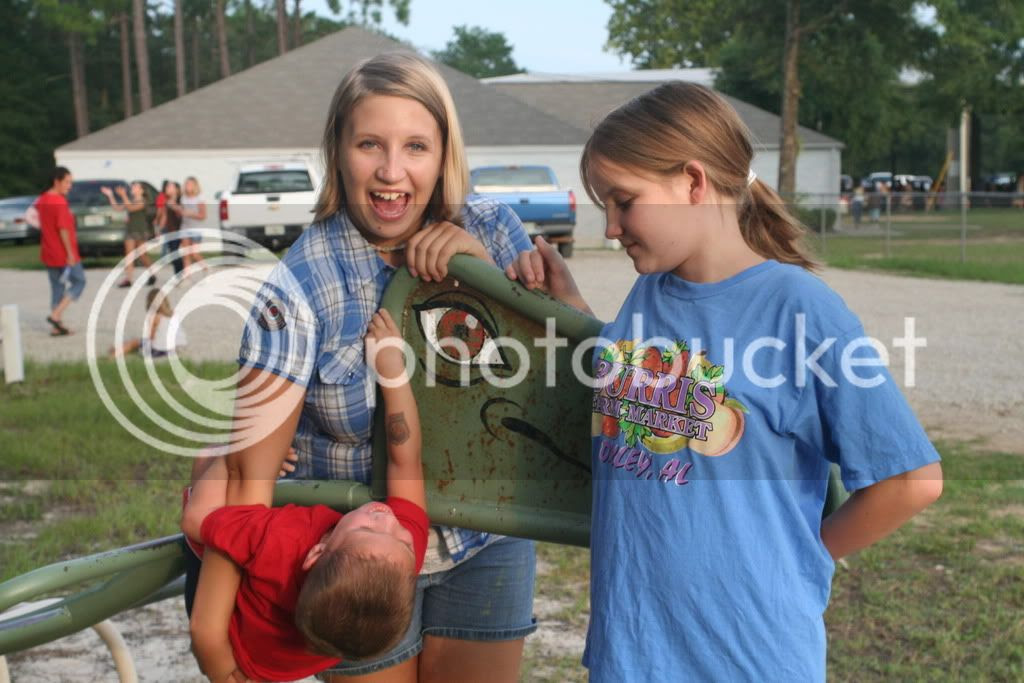 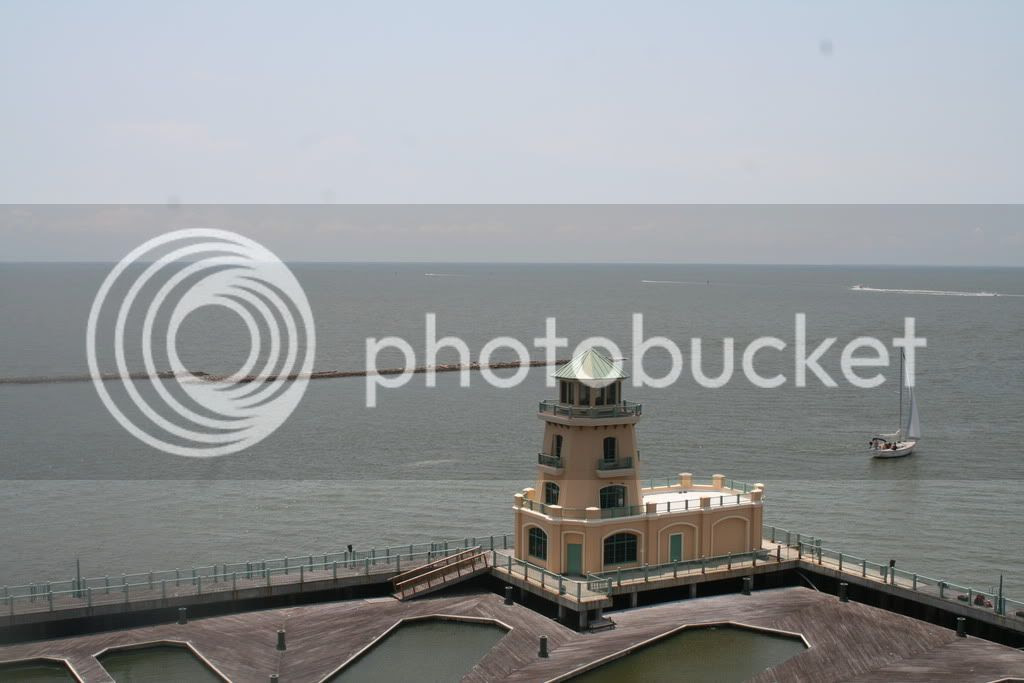 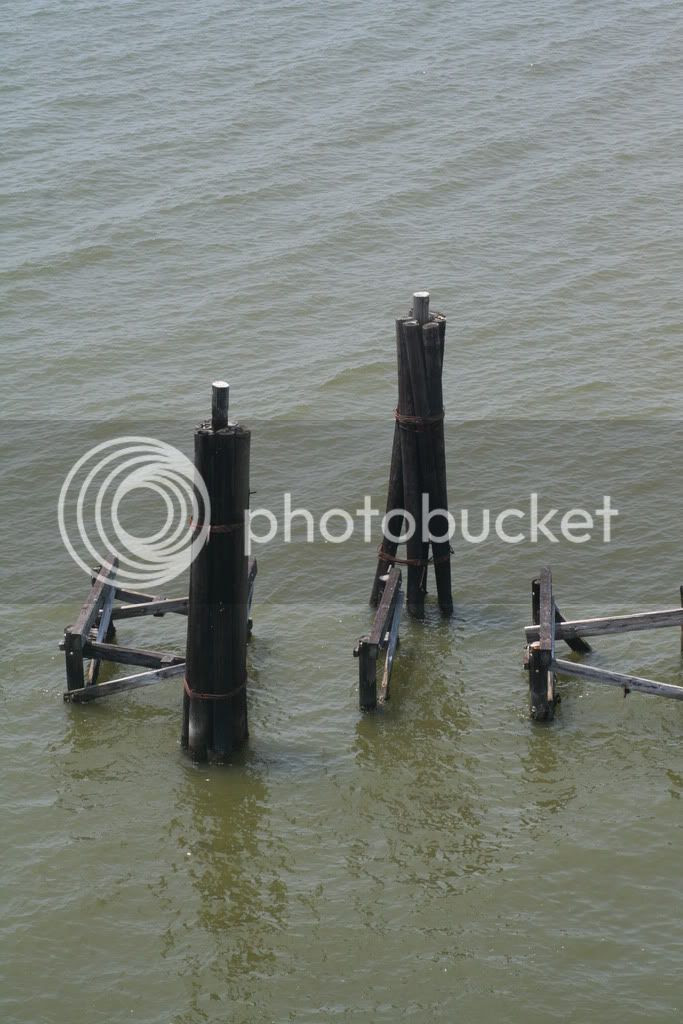 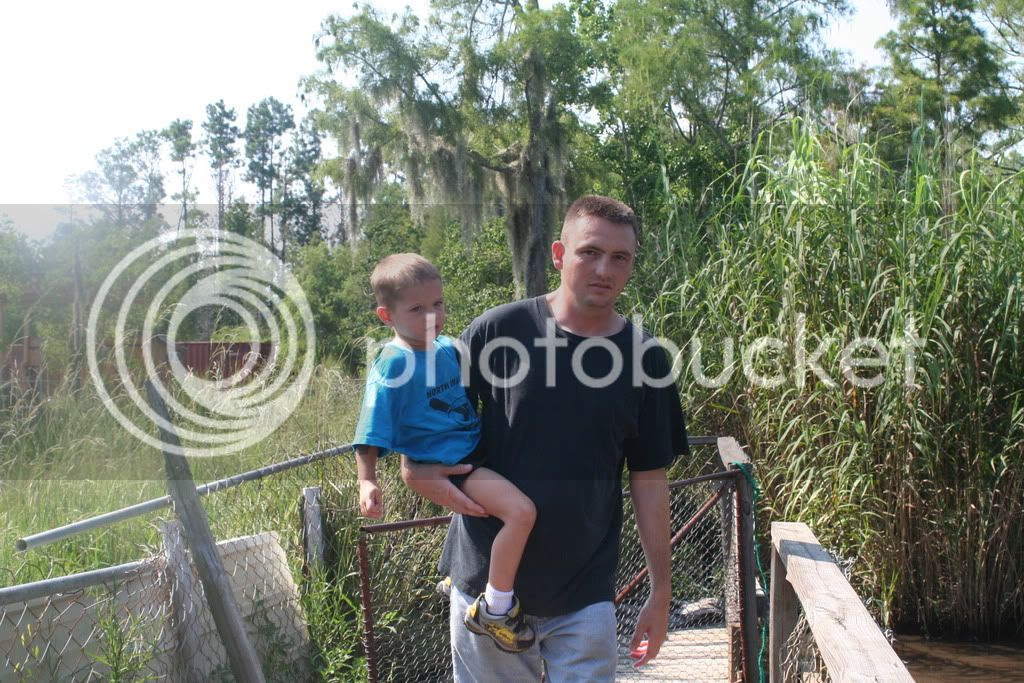 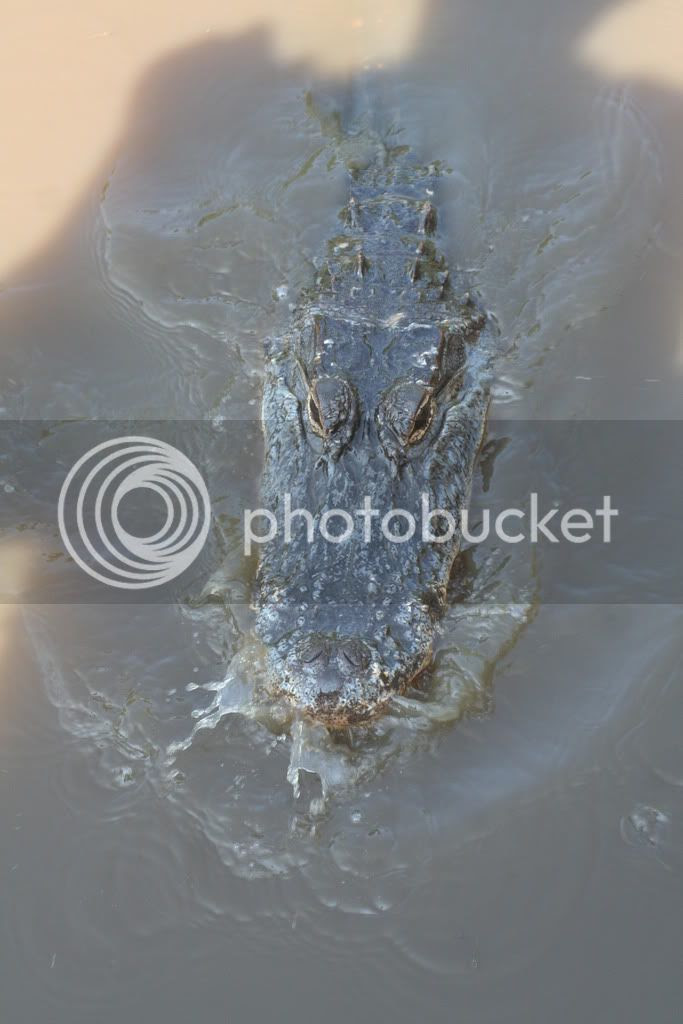 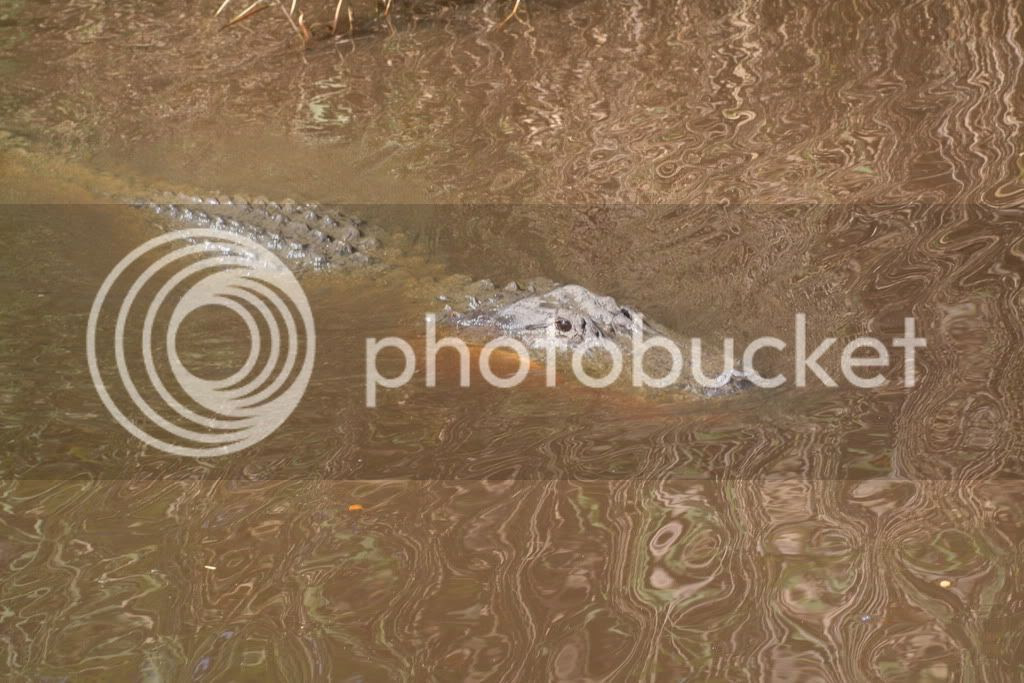 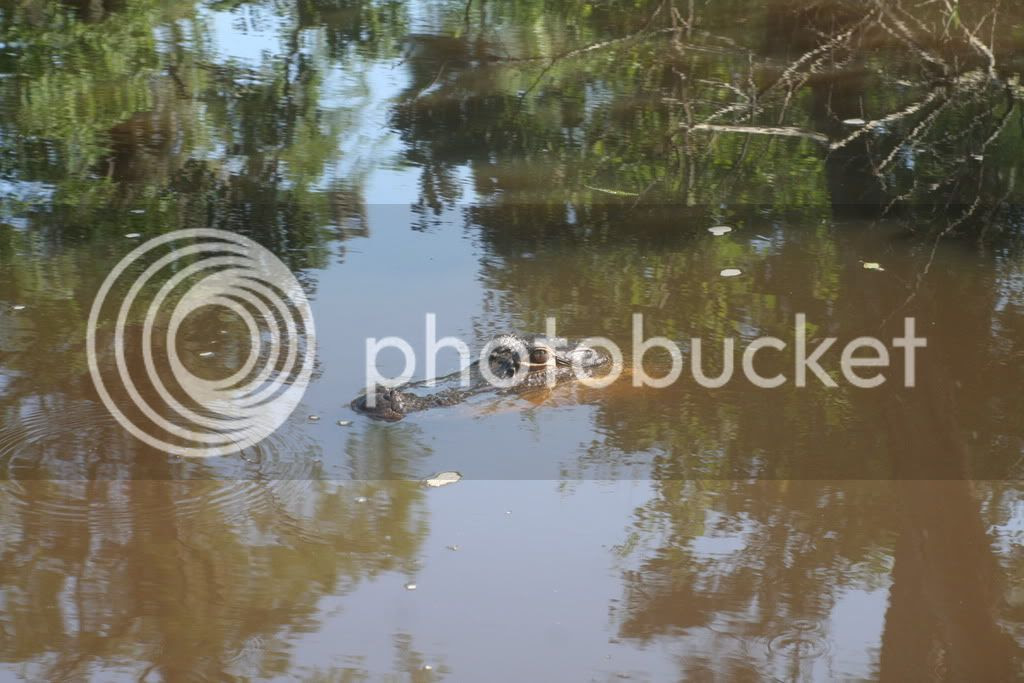 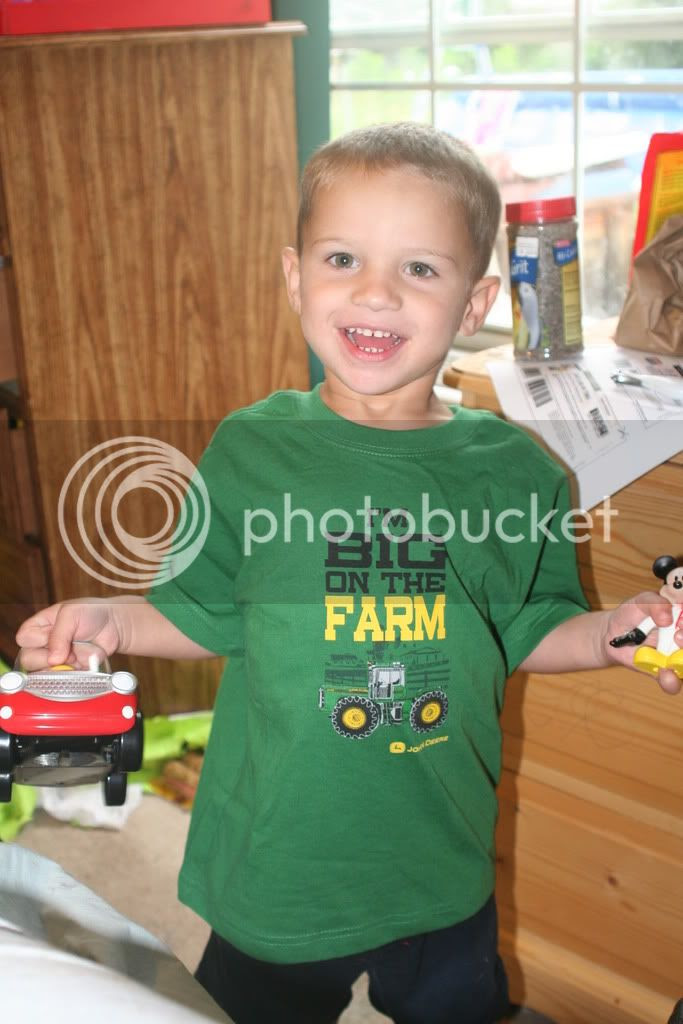 Today the kids and I went down to Ft. Walton today to return a couple of things and go to the music store to get Natalie's sax. The mall where the music store is has a small water park that DJ enjoyed while waiting on us. 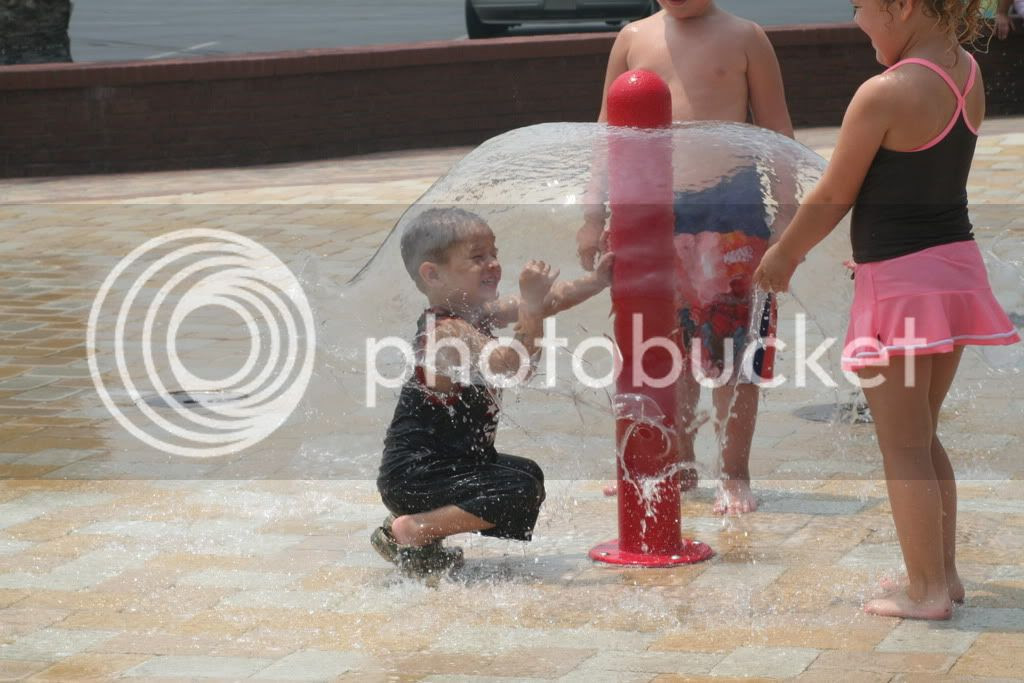 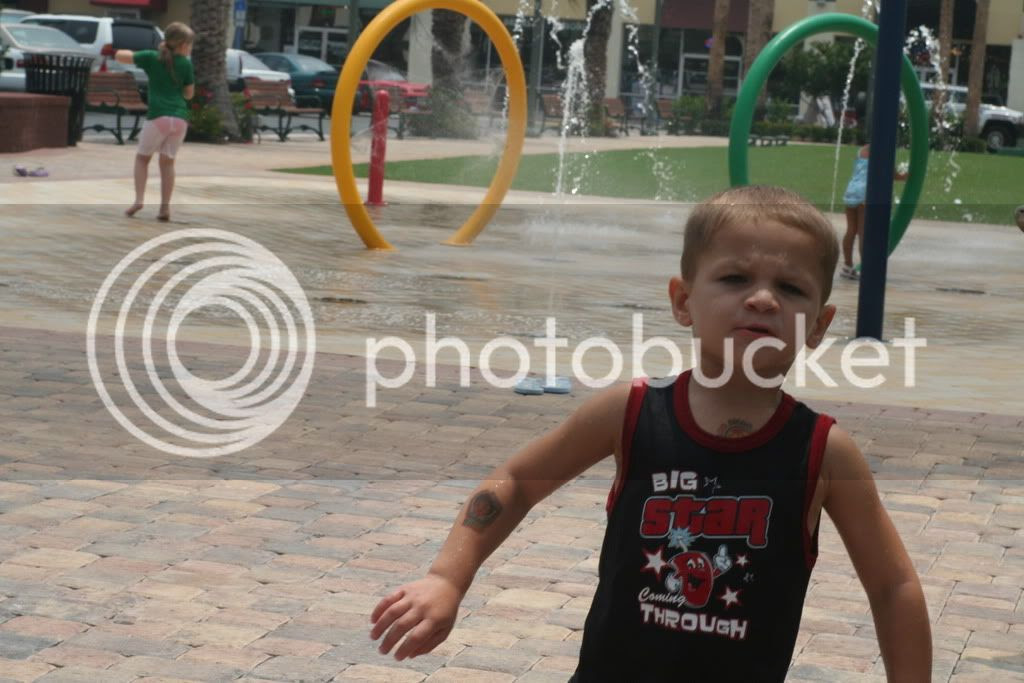 Posted by Unknown at 6:04 PM No comments: